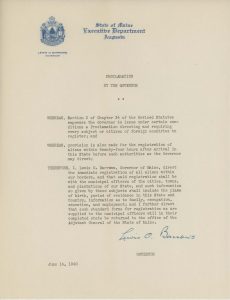 In 1940, as World War II was escalating in Europe, the United States was beginning to take precautions.  In Maine, one of those precautions was to begin registering all aliens living in the State.  On June 14, 1940, Governor Lewis E. Barrows ordered the registration of aliens living in Maine by proclamation.  Immediately these aliens were required to go to their municipal office and register there on forms provided by the state.  The forms asked for such information as date and place of birth, country of citizenship, and if the person had ever served in the military.

The registrations were completed quickly and by the end of July over 35,000 had been sent to the Adjutant General’s office.  The Adjutant General, James W. Hanson, was tasked with compiling the registrations and organizing the data.  Through this work it was established that aliens made up about 4.5% of Maine’s population.  Hanson also had large datasheets created which broke down the statistical data from the registrations in several useful ways.  The information was broken down first by state, then county, and then even by town.  Within those levels of organization, the number of aliens was also looked at by the number of men versus women, the length of time they had spent in Maine, and the country of origin.  For Canadian aliens, they were also broken down further into the province from where they originated.

Some additional interesting pieces of information that come from this are the way that women had to register.  There were specific rules about the citizenship status of married women, all depending on when they were married.  Most notably, American women who married an alien man between March 2, 1907 and September 22, 1922 lost their citizenship.  As a result, some American born women, even if they never left the country, would have lost their citizenship and were required to register as an alien.

Along with the registrations and the documentation describing how it should be done is a group of correspondence.  These letters include people writing in to the Intelligence Section of the Maine National Guard reporting people that they believed needed to register because they were aliens, because they had German background, or had ties to the Communist Party.  At the time Maine did have local communist parties and these letters help to provide some of this history.

These records are all available online and really add some information from a different perspective in the World War II period.  They can be used for genealogical purposes to find information about individuals, but are also incredibly useful for looking at the history of the larger population of Maine and its communities.