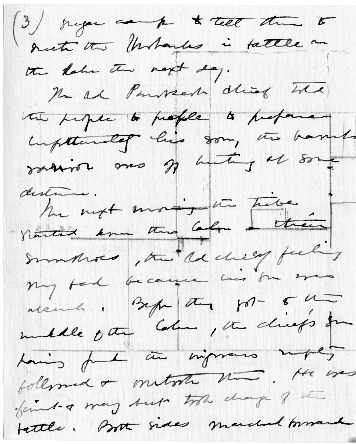 (3) sugar camp to tell them to meet the Mohawks in battle on the Lake the next day.

The old Penobscot chief told the people to people [?] to prepare - unfortunately his son, the bands warrior was off hunting at some distance.

The next morning the tribe started down the lake in their snowshoes, the old chief feeling very bad because his son was absent. Before they got to the middle of the lake, the chief's son having found the wigwams empty followed & overtook them. He was faint & weary but took charge of the battle. Both sides marched forward