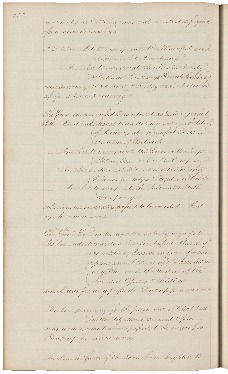 352.
was read once & Friday next at 10 o'clock assigned for a second reading.
Bill - An Act to incorporate the Wiscasset Birch Point Mill Company
- An Act to incorporate the New York City & Portland Exchange Granite Company -
were severally 1st & 2d time & Friday next at 10 oclock assigned for a 3d reading.
The Committee on engrossed Bills reported as truly engrossed
Bill - An act additional to an act regulating the taking of Alewives at Nequasset Falls in the town of Woolwick
- An Act to incorporate the Lincolnville Soap Stone, Coal & Marble Company
- An Act additional to an act establishing Salaries for Judge & Registers of Probate
- An Act to incorporate the Saltwater Falls Company -
which were severally passed to be enacted. Sent up for concurrence.
The same Committee reported as truly engrossed -
Resolve - additional to a Resolve, passed March 17th 1835 entitled, Resolve in favor of certain Officers and Soldiers of the Revolutionary War, and the widows of the deceased Officers & Soldiers
which was finally passed. Sent up for concurrence.
Resolve - providing for the payment of Clerk hire in the adjutants general Office was read a second time & passed to be engrossed. Sent up for concurrence.
Resolve in favor of the Road from Brighton to