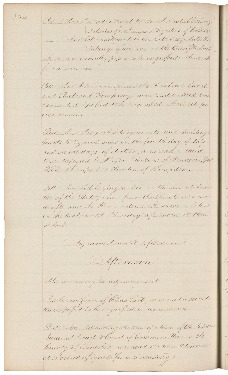 344.
Bill - An Act additional to "An Act establishing salaries for Judges & Registers of Probate
-An Act additional to an act to regulate the taking of alewives on the town of Woolwich
which were severally passed to be engrossed. Sent up for concurrence.
Bill - An Act to incorporate the Kirkland Canal and Railroad Company, was read a third time & amended & passed to be engrossed. Sent up for concurrence.
Bill - An Act prohibiting arrests and holding Courts to try civil suits on the fourth day of July and on the days of election, was read a third time & referred to Messrs Perkins of Kennebunkport, Hobbs of Eastport, Hamlin of Hampden.
Bill - An Act laying a Tax on the several Counties of the State, came from the Senate in new draft and the House ordered the same to be laid on the table until Thursday afternoon at three o'clock
Adjourned until afternoon.
Afternoon
Met according to adjournment
Resolve in favor of Elias Cobb, was read a second time & passed to be engrossed in concurrence.
Bill - An Act altering the time of a term of the Supreme Judicial Court & Court of Common Pleas in the County of Lincoln, was read 1st & time & tomorrow at 10 oclock assigned for a 3d reading