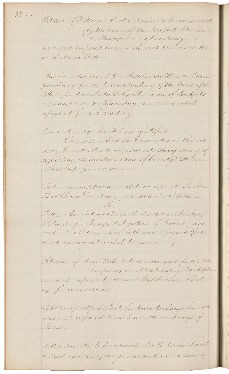 334.
Petition of William Martin & others to be incorporated by the name of the Newport Mill Dam & Manufacturing Company
was read and referred in concurrence to the Committee on Interior Waters.
Resolve additional to a Resolve entitled a Resolve providing for the promulgation of the laws of the State, laid on the table by Mr Parris of Buckfield was read once & Thursday next at 10 oclock assigned for a 2d reading.
On motion by Mr Holmes of Alfred
Ordered, That the Committee on the Judiciary be instructed to inquire into the expediency of regulating the compensation of County Attornies.
Sent up for concurrence
Bill - An additional Act to incorporate the MooseHead Dam Company, was read 1st and 2d time -
also
Bill - An Act additional to an Act establishing Salaries for Judges & Registers of Probate, was read a 1st & 2d time - and both were assigned for a third reading at 10 oclock tomorrow.
Petition of Ariel Wall to be remunerated for his time & expenses in apprehending Counterfeiters -
was read & referred to the next Legislature. Sent up for concurrence.
Petition of Alfred Jack for leave to change his name, was read & referred to the Committee on change of Names.
Bill - An Act to incorporate the Kirkland Canal & Railroad Company, was read a 1st & 2d time &