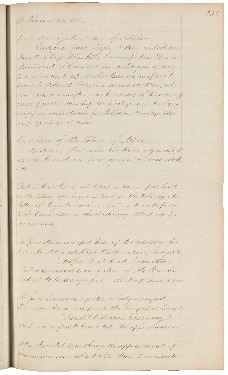 331.
the House concurred.
On motion by Mr Rollins of Nobleboro
Ordered That Messrs Rollins of Nobleboro, Bruggell [?] of Cape Elizabeth, Cram of New Sharon, Sturdivant of Cumberland & Morgan of Survey be a Committee to report what laws are necessary to secure to different Religious denominations, who now are, on hereafter may be owners of Pews in any house of public, worship the privilege respectively of occupying such House for Religious Worship their just proportion of time.
On motion of Mr Holmes of Alfred
Ordered, That when the House adjourns, it adjourn to meet on Monday next at nine oclock A.M.
Bill - An Act to establish a municipal Court in the town of Augusta laid on the table by Mr Potter of Augusta, was read 1st & 2d time & referred to the Committee in the Judiciary. Sent up for concurrence.
The Committee on engrossed Bills reported as truly engrossed
Bill - An Act to establish the Frankfort, Bangor & Belfast Rail Road Corporation
which was amended on motion of Mr Hamlin & ordered to be reengrossed. Sent up for concurrence.
The fame Committee reported as truly engrossed
Bill - An Act to incorporate the Hampden & Carmel Canal & Rail road Company
which was passed to be enacted. Sent up for concurrence.
Bill - An Act to authorize the appointment of Commissioners without this State to administer