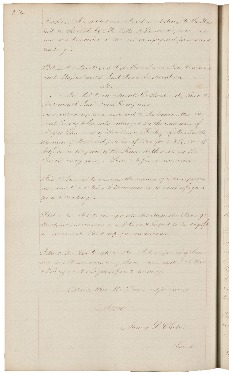 314.
Resolve - An additional Resolve relating to the Blind laid on the table by Mr Wells of Hallowell, was read once and tomorrow at ten o'clock assigned for a second reading.
Bill - An Act to establish the Maine, New Hampshire and Massachusetts Rail Road Corporation -
also
" An Act to incorporate the Portland, Saco, & Portsmouth Rail Road Company -
were called up and referred to the Committee on Rail Roads & Canals enlarged by the addition of Messrs Chadwick of Gardiner, Farley of New Castle, Lyman of Portland, Tobin of Hartford & Gordon of Belfast on the part of the House with such as the Senate may join. Sent up for concurrence.
Bill - An Act to change the name of certain persons was read 1st & 2d time & tomorrow at 10 oclock assigned for a 3d reading.
Bills - An Act to incorporate the augusta Savings Institution was read a 3d time & passed to be engrossed as amended. Sent up for concurrence.
Bill - An act to repeal An Act respecting lumber in Mattawamkeag River was read 1st & 2d time & Friday next assigned for a 3d reading.
And then the House adjourned
Attest
James L Child
Clerk