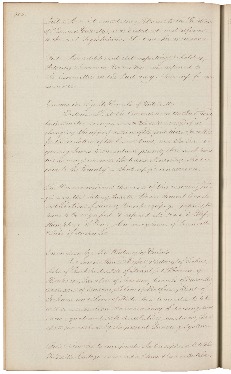 306.
Bill - An Act constituting Ellsworth the Shiretown of Hancock County, was called up and referred to the next Legislature. Sent up for concurrence
Bill - An additional act respecting Inholders, Retailers & Common Victuallers, was referred to the Committee on the Judiciary. Sent up for concurrence.
On motion by Mr Coombs of Waterville
Ordered, That the Committee on the Judiciary be instructed to inquire into the expediency of so changing the appropriation of the forfeitures & penalties for the violation of the license laws, and the law requiring Towns to maintain pounds, that such penalties as may accrue to the towns themselves, shall be paid to the County - Sent up for concurrence.
The House reconsidered their vote of this morning on Resolve requiring the Acting Quarter Master General to make distribution of sundry Camp equipage, passing the same to be engrossed & referred the same to Messrs Humphrey of Gray, Cummingham of Swanville & Lake of Bucksport
On motion by Mr Whitney of Calais
Ordered, That Messrs Whitney of Calais, Lake of Bucksport, Ide of Frankfort, Hamlen of Hampden, Garcelon of Lewiston, Coombs of Waterville, Steward of Anson, Jobin of Hartford, Hunt of Gorham and Lane of Hollis be a committee to take into consideration the expediency of devising some more equal and safe circulating medium, than that furnished by the present Banking system.
Bill - An Act to incorporate the Erosophian adelphi Waterville College was read a 3d time & laid on the table.