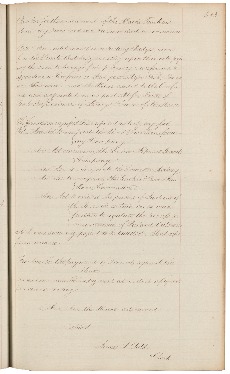 303.
Resolve for the endowment of the Maine Teachers Seminary was read once & recommitted in concurrence.
Bill - An additional act respecting Bridges, came from the Senate that body insisting upon their vote passing the same to be engrossed proposing a conference & appointing as conferees on their part Messrs Fish, Merrow and Severance and the House agreed to the Conference and appointed on its part Messrs Foster of Pembroke, Eastman of Strong & Cram of New Sharon.
The Committee engrossed Bills reported as truly engrossed
Bill - An Act to incorporate the Minto Shoe Manufacturing Company -
- An Act concerning the Sullivan Hopewell Granite Company
- An Act to incorporate the Livingston Academy
- An Act to incorporate the Penobscot River Rail Road Corporation -
- An Act to extend the powers of Justices of the Peace in certain cases and further to regulate the process for maintenance of Bastard children
which were severally passed to be enacted. Sent up for concurrence.
Resolve for the payment of accounts against the State -
was read once and Thursday next at 10 oclock assigned for a second reading.
And then the House adjourned
Attest
James L Child
Clerk.