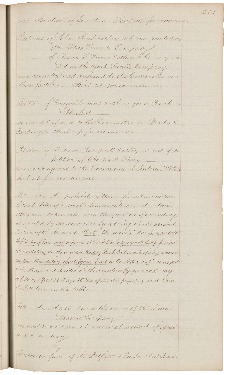 283.
and alteration of Counties. Sent up for concurrence
Petitions of John Neal & others to be incorporated as the Hollis Granite Company
- of Roscoe G Greene & others to be incorporated as the York Sanite Company
were severally read & referred to the Committee on Manufactures. Sent up for concurrence.
Petition of George Stevens & others for a Bank at Bluehill -
was read & referred to the Committee on Banks & Banking. Sent up for concurrence.
Petition of William Ramsdell & others in aid of the petition of Charles F Hally -
was read & referred to the Committee on Interior Waters
Sent up for concurrence.
Bill - An Act prohibiting the emission & circulation of Bank Bills of a small denomination and certain others was taken up - and the question of amending as reported by the Committee by adding in the second section after the word That, the words " That from and after the first day of June next, no person in this State or body corporate shall pass, or part into circulation, directly or indirectly, any Bank Bill or note of a less denomination than three dollars, issued by any Bank in this State; and" was put to the House and decided in the negative by yeas and nays or follows yeas 83 nays 85 [see appendix page 71.] and then the Bill laid on the table.
Bill - An Act to change the name of the Maine Granite Company
was read 1st & 2d time & tomorrow at 10 oclock assigned for a 3d reading.
Resolve in favor of the Belfast & Quebec Rail Road