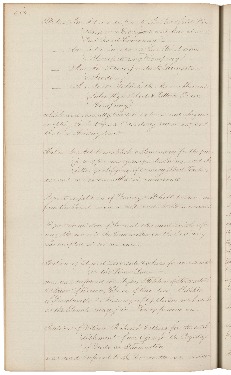 282.
Bill - An Act to incorporated the Readfield, Winthrop and Cobbossee Contee, Canal and Rail Road Company -
- An Act to incorporate the Minot Shoe Manufacturing Company -
- An Act to incorporate the Livingston Academy -
- An Act to establish the Maine Manual Labor High School & Pattern Farm Company -
which were severally read 1st & 2 time and assigned excepting the Last for a 3d reading tomorrow, and that on Friday next.
Bill - An Act to establish a Seminary for the purpose of promoting useful learning, and the better qualifying of primary School Teachers
was read once & recommitted in concurrence
Report on petition of Denny McCobb & others came from the Senate recommitted and the House concurred.
Report on petition of Samuel & Edward Smith referring the same to the Committee on the Judiciary was accepted in concurrence.
Petition of Alwood Levensale & others for an alteration in the Lime Law
was read & referred to Messrs Fletcher of Thomaston OBrien of Warren, Chase of Camden, Millikin of Lincolnville & Meserry of Appleton with such as the Senate may join. Sent up for concurrence.
Petition of William R Keith & others for the establishment of an Office for the Registry of Deeds at Thomaston
was read & referred to the Committee on division