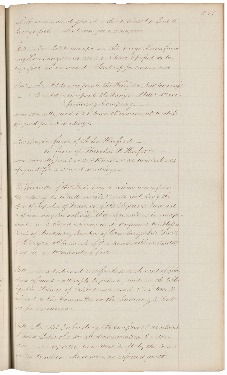 255.
which were severally read a third time & passed to be engrossed. Sent up for concurrence.
Bill - An Act to incorporate the Perry Manufacturing Company, was read a 3d time & passed to be engrossed as amended. Sent up for concurrence.
Bill - An Act to incorporate the Fairfield Mill Company
- An Act to incorporate the Bangor Mill & Manufacturing Company -
were severally read 1st & 2d time & tomorrow at 10 oclock assigned for a 3d reading.
Resolves in favor of John Harford -
- in favor of Phinchas R Harford -
were severally read once & tomorrow at 10 oclock was assigned for a second reading -
The Committee of the Judiciary to whom was referred the order of the 18th ult, in relation to abolishing the office of Reporter of Decisions of the Supreme Judicial or of reducing his salary reported, that legislation is inexpedient, and the report was read & referred to Messrs Paris of Bucksfield, Bunker of Cranberry Isle, Smith of Palmyra & Chadwick of Gardiner with instructions to report a statement of facts.
Bill - An additional act for the punishment of felonious assaults & attempts to poison, laid on the table by Mr Holmes of Alfred was read 1st & 2d time & referred to the Committee on the Judiciary. Sent up for concurrence.
Bill - An Act prohibiting the emission & circulation of Bank Bills of a small denomination & certain others, was reported as a new Draft by the Committee to whom the same was referred with