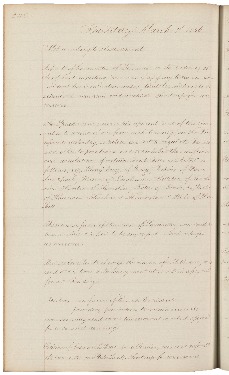 248.
Tuesday March 1st 1836
Met according to adjournment.
Report of Committee of Finance on the Order of 25 Jany last respecting the mode of assessing taxes on nonresident lands in certain cases, that legislation is inexpedient, was read and accepted. Sent up for concurrence.
The Speaker announced his appointment of the Committee to consist of one from each County, on the Bill referred yesterday, entitled "an act to regulate Banks and other Corporations and to prohibit the emission and circulation of certain Bank Bills or Notes" as follows, viz. Humphrey of Gray, Perkins of Kennebunkport, Wilson of Bingham, Millikin of Lincolnville, Hamlen of Hamden, Foster of Pembroke, Wells of Hallowell, Fletcher of Thomaston & Holt of Bluehill -
Resolve in favor of the town of Lewiston was read on second time & passed to be engrossed. Sent up for concurrence.
Bill - An Act to change the name of Milburne, was read 1st & 2d time & Tuesday next at 11 o'clock assigned for a 3d Reading
Resolves - in favor of Enoch Cordwell
- providing for indexes to certain Journals were severally read once & tomorrow at 10 oclock assigned for a second reading.
Petition of Susannah Bogs - for a Pension, was read & referred to the committee on State Lands. Sent up for concurrence.