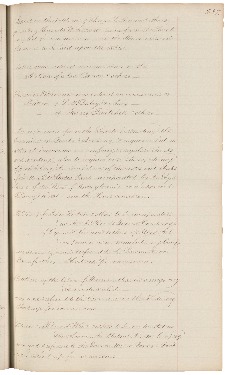 237.
Report on the petition of Eleazer Colburne & others, granting leave to withdraw, came from the Senate accepted for concurrence - and the House ordered the same to be laid upon the table.
Notice was ordered in concurrence on the Petition of Asa Brown & others -
Leave to Withdraw was ordered in concurrence on Petition of L.Y. Daley & others -
- of James Twitchell & others -
An order came from the Senate instructing the Committee on Banks & Banking to inquire what additional provisions are necessary to regulate Banks and Banking - also to inquire into the expediency of prohibiting the circulation of the notes and checks of the United States Bank incorporated by the Legislature of the State of Pennsylvania and approved February 18th 1836 - and the House concurred.
Petitions of John Horton & others to be incorporated as the McHeards Granite Company - of Cyrus K Conant & others of Alfred to be incorporated as a manufacturing Compy were severally read & referred to the Committee on Manufactures. Sent up for concurrence.
Petition of the town of Hermon that its doings may be made valid - was read & referred to the Committee on the Judiciary. Sent up for concurrence.
Petition of David White & others to be incorporated as the Monmouth Mutual Fire Ins. Company was read & referred to the Committee on Banks & Banking. Sent up for concurrence.