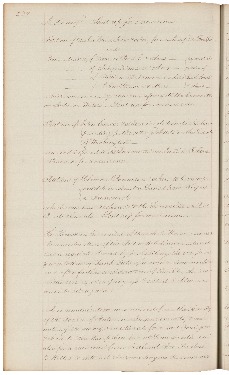 230.
Judiciary. Sent up for concurrence.
Petition of Elisha Chick Junr - & others for a wharf at Frankfort and Remonstrance of Samuel Reed 2d & others - of John Gilman & others - of William P Stinson & others - of John Stinson & others - } against the petition of Jacob Smith & others -
which were severally read and referred to the Committee on Interior Waters. Sent up for concurrence.
Petition of John Carver & others in relation to the law providing for the setting of nets in the County of Washington -
was read & referred to the Committee on Interior Fisheries
Sent up for concurrence.
Petition of Solomon Dennison & others to be incorporated to construct a Canal from Freeport to Brunswick - which was read & referred to the Committee on Rail Roads & Canals. Sent up for concurrence.
The House in Committee of the whole House assumed the consideration of the Bill entitled "an additional act to regulate Banks by prohibiting the emission & circulation of Bank Bills of a small denomination and after further consideration of the Bill, the Committee rose reported progress & asked & obtained leave to sit again.
A communication was received from the Secretary of the Board of Internal Improvements, transmitting " the survey and estimate for a Rail Road from Gorham to New Hampshire line at Somersworth - and also for a rail road from Portland thro Scarboro to Hollis to intersect the preceding, as the same were