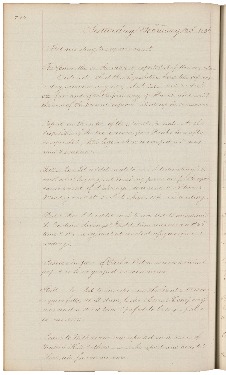 206.
Saturday February 20th 1836
Met according to adjournment
The Committee on the subject, reported the following order -
Ordered, That the Legislature hold two sessions a day commencing at 9 oclock AM. and 2 oclock P.M. from and after the first day of March and until the end of the present session. Sent up for concurrence.
Report on the order of the 11th inst, in relation to the disposition of the tax received from Banks here after incorporated, that legislation is inexpedient was read & accepted.
Bill - An Act additional to an Act directing the method of laying out & making provision for the repair & amendment of Highways, was read 1st & 2d time & Monday next at 10 oclock assigned for a 3d reading.
Bill - An Act additional to an act to incorporate the Gardiner Savings Institution was read a 1st & 2d time & Monday next at 10 oclock for a 3d reading.
Resolve in favor of Elisha Hilton was read twice & passed to be engrossed in concurrence
Bill - An Act to incorporate the Great Androscoggin Falls, Mill dam, locks & Canal Company was read a third time & passed to be engrossed in concurrence.
Leave to withdraw was reported on petition of Winslow Hall & others - and the report was accepted. Sent up for concurrence.