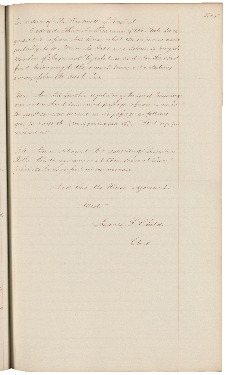 205.
On motion of Mr Wardwell of Penobscot -
Ordered That the Treasurer of the State be requested to inform this House what the expenses would probably be to obtain the gold and silver to pay the members of the present Legislature and also the school funds belonging to the several towns & plantations arising from the Bank Tax.
Bill - An Act further regulating Judicial Proceedings was read a third time and passage refused - and the question was decided on its passage as follows yeas 73 nays 86 [see appendix page 56.] Sent up for concurrence.
Bill - An additional Act respecting Lewiston Falls Academy was read three several times & passed to be engrossed in concurrence
And then the House adjourned
Attest
James L Child
Clerk.