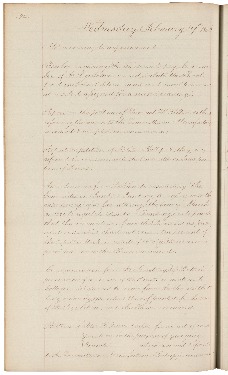 194.
Wednesday February 17th 1836.
Met according to adjournment
Resolve - requiring the Treasurer to pay the members of the Legislature, and distribute the school fund in gold & silver, was read once & tomorrow at 10 o'clock assigned for a second reading.
Report on the petition of Samuel H Hilton & others referring the same to the Committee on - Manufactures was read & accepted in concurrence.
Report on petition of Nathan Phillips & others, was referred in concurrence to the Committee on Incorporation of Towns.
An order came from the Senate instructing the Committee on Banks & Banking to inquire into the expediency of so far alerting the law of March 31 1831 to regulate Banks & Banking as to provide that the amount due from the Directors as principal or sureties, shall not exceed ten percent of the capital stock, instead of thirty three, as now provided - and the House concurred.
Communication from the Secretary of State in pursuance of an order of the 1st inst, in relation to Colleges, Academics &c, came from the Senate that body ordering 700 copies thereof printed for the use of the Legislature, and the House concurred.
Petition of Peter H Greene & others for an act of incorporate on for the purpose of quarrying granite - which was read & referred
to the Committee on Manufactures. Sent up for concurrence.