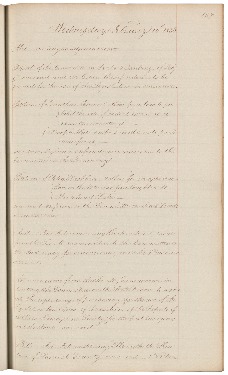 167.
Wednesday February 10th 1836
Met according to adjournment.
Report of the Committee on Banks & Banking of Feb, 9th was read and 500 copies thereof ordered to be printed for the use of the Legislature in concurrence.
Petition of Jonathan Brown & others for a law to prohibit the sale of ardent spirits at or near town meetings -
- of Joseph Hall & others in relation to partition fences -
were severally read & referred in concurrence to the Committee on the Judiciary.
Petition of Peleg Washburn & others for an appropriation on the State road from Brighton to Moosehead Lake - was read & referred to the Committee on State Lands in concurrence.
Bill - An Act concerning Corporations, came from the Senate recommitted to the Committee on the Judiciary for Concurrence and the House concurred.
An order came from the Senate for concurrence instructing the Committee on the State Prison to inquire into the expediency of purchasing for the use of the Legislature ten copies of the edition of the Reports of the Prison Discipline Society for the first ten years and the House concurred.
Bill - An Act constituting Ellsworth the Shire town of Hancock County was read a 1st & 2d time