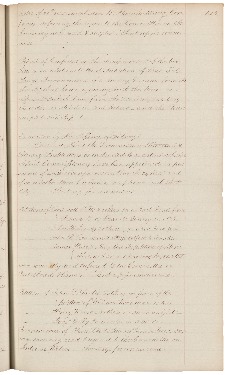 143.
Order of 30th ult, in relation to Manufacturing Companies, referring the dame to the Committee on the Judiciary was read & accepted. Sent up for concurrence.
Report of Conferees on the disagreement of the two Houses in relation to the distribution of Lieut Col. Longs Reconnaissance of a survey & came from the Senate; that body agreeing with the House in a different distribution from that contemplated 69 the order as stated in said Report - and the House accepted said Report.
On motion by Mr Tiffany of Sidney
Ordered, That the Committee on Literature & Literary Institutions be instructed to ascertain whether School Commissioners have been appointed on pursuance of a Resolve approved March 24 1835 - and if so whether there has been a compliance with that duty - Sent up for concurrence
Petitions of Roswell Fells & others for a Rail Road from Brewer to a granite Quarry in No8.
- " John H Jarvis & others for a Rail Road from
- " John R. Radman & others Belfast to Canada
- " James Huse & others that the petition of Moses Mason & and others may be granted
were severally read & referred to the Committee on Rail Roads & Canals. Sent up for concurrence.
Petition of John L Sartle & others in favor of the petition of William Woodman & others
- " Henry Warren & others on same subject -
- " Benja Colby Jr in relation to Mills -
Remonstrance of Moses Pike & others agst looms on Passachimkeag [?] were severally read & referred to the Committee on Interior Waters. Sent up for concurrence.