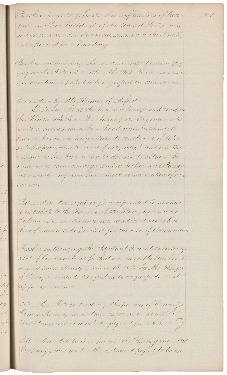 141.
Resolve providing for the choice of Electors of President and Vice President of the United States, was read once, amended in concurrence with the Senate, and assigned for a 2d reading.
Resolve authorizing the constructing of a stone flagging on the State lot north of the State House was read a second time & passed to be engrossed in concurrence.
On motion by Mr Holmes of Alfred
Ordered, That the Governor be requested to uniform this House, whether Mr Barney the Engineer who made a survey for a Rail Road from Portland to Gorham has made any return to the Board of Internal Improvements - and if not, why & and who then any means has been or can be devised to obtain the evidences of said survey, and who then said Barney has received any and how much compensation of said service.
Bill - An Act requiring incorporated Companies to contribute to the Revenue of the State, reported by the Committee on Finance was read twice and 300 copies there of ordered to be printed for the use of the members.
Resolve authorizing the Adjutant General to exchange a lot of land in Paris for that on which the Gun House in said town stands - laid on the table by Mr Thayer of Paris, was read & passed to be engrossed. Sent up for concurrence.
Bill - An Act restricting the powers of County Commissioners in certain cases, was read 1st & 2d time & tomorrow at 10 oclock assigned for a 3d reading
Bill - An Act to incorporate the Winnegame Mill Company, was read a third time & passed to be en-