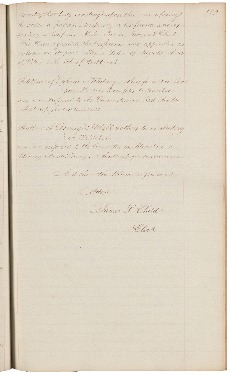 139.
Senate, that body insisting upon their vote refusing the order a passage - proposing a Conference and appointing as Conferees Messrs Jarvis, Benson & Clark.
The House agreed to the Conference and appointed as conferees on its part Messrs Potter of Augusta, Lane of Hollis & Smith of Westbrook.
Petition of Ephraim Whitney & others for a Rail Road from Machias River falls to Jonesboro' was read and referred to the Committee on Rail Roads. Sent up for concurrence.
Petition of Denny McCobb & others for an Academy at Waldoboro
was read & referred to the Committee on Literature & Literary Institutions. Sent up for concurrence.
And then the House adjourned.
Attest
James L Child
Clerk