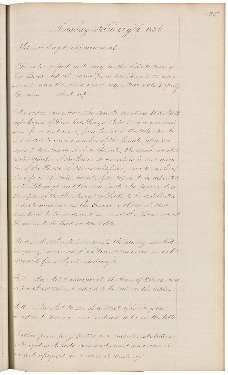 135.
Tuesday February 2d 1836
Met according to adjournment.
The order passed yesterday for the distribution of Col Longs Report, came from the Senate nonconcurred and the House insist upon their vote passing the same. Sent up.
An order came from the Senate directing that twenty eight Copies of Lieut Col. Longs Report, of a reconnaissance for a rail road, from Quebec to the Atlantic, be distributed to each member of the Senate, fifty six copies to the President of the Senate, the same number to the Speaker of the House - seven copies to each member of the House of Representatives, and to each of the Offices of State, twenty five copies to be deposited in the Library and the remainder be deposited in the office of the Secretary of State, to be distributed in such manner as the Governor & Council shall from time to time direct - and the House ordered the same to be laid on the table.
Bill - An Act to incorporate the Wennegance Mill Company, was read 1st & 2d tomorrow at 10 oclock assigned for a third reading.
Bill - An Act to incorporate the town of Welson was read a third time & ordered to be laid on the table.
Bill - An Act to set off a tract of land from Lewiston to Greene - was ordered to be on the table.
Resolve providing for the purchase & distribution of Fairfield's Reports was read once & tomorrow at 10 oclock assigned for a second reading.