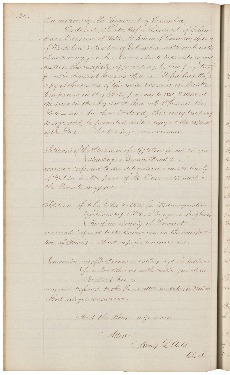 134.
On motion by Mr Lippincot of Columbia,
Ordered, That Messrs Lippincot of Columbia, Mildram of Wells, O.Brien of Cornish, Sprout of Waldoboro' & Hamlin of Columbia with such as the Senate may join be a Committee to take into consideration the necessity of providing by law, for getting from the Adjutant Generals Office, in Massachusetts, a copy of the records of the metes & bounds of Militia Companies in this State, previous to 1821, & deposit the same in the Adjutant Generals Office in this State - and further Ordered, That every Company so organized; be furnished with a copy at the expense of the State. Sent up for concurrence.
Petition of the Selectmen of Appleton for and in constructing a County Road &
was read & referred to the delegation from the County of Waldo on the part of the House with such as the Senate may join.
Petition fo John Ellis & others for the incorporation of Township No2, 2d Range in Binghams Purchase County of Somerset
was read & referred to the Committee on the incorporation of Towns. Sent up for concurrence.
Remonstrance of E. Barnard & others agst. the petition for a Pier & Wharves on the middle grounds in Penobscot River - was read & referred to the Committee on Interior Waters. Sent up for concurrence.
And the House adjourned.
Attest
James L Child
Clerk