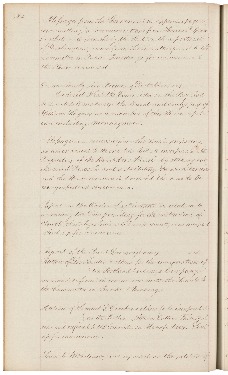 126.
Message from the Governor [see appendix page 16,]
transmitting a Communication from Thomas F Spear in relation to furnishing the State with a portrait of Washington, came from the Senate referred to the Committee on Public Building for concurrence & the House concurred.
In motion by Mr Brown of East Machias,
Ordered That the Committee on the Pay Roll be directed to make up the travel and daily pay of William Haynes as a member of this House up to and including Monday next.
Message was received from the Senate proposing an amendment to the enacted Bill to incorporate the Proprietors of the Hampden House" by striking out the word "Rawson" and substituting the word "Ransom" and the House concurred & ordered the same to be reengrossed in concurrence.
Report on the Order of 27th instant in relation to amending the Law providing for the instruction of Youth, that legislation is inexpedient, was accepted. Sent up for concurrence.
Report of the Bank Commissioners and Petition of Levi Cutter & others for the incorporation of the Portland Exchange Company were read & referred in concurrence with the Senate to the Committee on Banks & Banking
Petition of Samuel E Crocker & others to be incorporated as the Portland, Steam Cotton Factory - was read & referred to the Committee on Manufactures. Sent up for concurrence.
Leave to Withdraw, was reported on the petition of