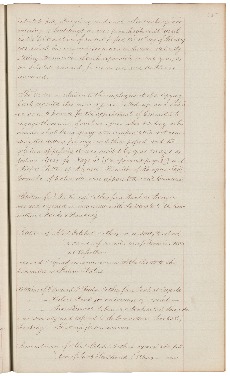 65.
intent to kill, Burglary and such other breaking and entering of buildings as was punishable with death by the first section of an Act passed the 28th day of February 1821 which has occurred since 1823 inclusive - distinctly stating the number of each separately in each year, as per schedule annexed, for concurrence and the House concurred.
The order in relation to the employment of a Copying Clerk reported this morning was called up and amended so as to provide for the appointment of Committee to engage the services of such an officer when & so long as his services shall be necessary at a compensation not exceeding two dollars per day and then passed and the question of passing it was decided by yeas & nays as follows Yeas 94 Nays 61 [see appendix page 27.] and Messrs Potter of Augusta, Hamlin of Hampden and Coombs of Waterville were appointed said Committee.
Petition of N.G. Norcross & others for a Bank at Bangor was read & referred in concurrence with the Senate to the Committee on Banks & Banking.
Petition of Abiel Getchell & others for authority to extend a dam across six miles across Kennebec River at Vassalboro -
was read & referred in concurrence with the Senate to the Committee on Interior Waters -
Petitions of Edmund T. Bridge & others for a Bank at Augusta
" - Calais Bank for an increase of capital -
" - Iddo Kimball & others for a Bank at East Thomaston
were severally read & referred to the Committee on Banks & Banking. Sent up for concurrence.
Remonstrance of Abiel Getchel & others against the petition of Jacob Southwick & others - was