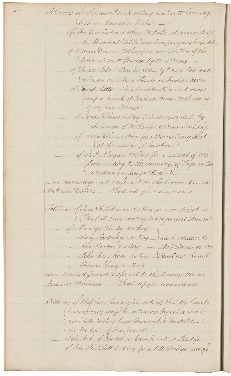 34.
Petitions of Andrew Bourk & others relative to booming logs on Kennebec River -
- of Stephen Parlin & others that the act incorporating the Moosehead Lake Dam Company maybe repealed -
- of William Emerson & others for a modification of the statute relative to flowage by Mill Dams
- of Sewall Lake & others for authority to erect Piers and wharves on certain Shoals in Penobscot River.
- of Samuel Little & others for authority to erect dams across a branch of Penobscot River northwardly of Orphan Island
- of Jonas Chase & others to be incorporated by the name of the "Fairfield Boom Company"
- of John Elliot & others for a Steam Ferry Boat at the village of Gardiner
- of J.B. Morgan & others for a repeal of the laws relating to the running of Logs on the Mattawankeage River &c
were severally read & referred to the Committee on Interior Waters. Sent up for concurrence.
Petition of Benja F Tallman & others for a modification of the fish Laws relating to Neguasset Stream.
- of Manly Hardy & others
" Henry Partridge & others
" Asa Parker & others
" John Burnham & others
" Thomas Long & others
all in relation to the fisheries on the Penobscot River
were severally read & referred to the Committee on Interior Fisheries. Sent up for concurrence.
Petitions of Stephen Purrington & others that the County Commissioners may be authorized lay out a road over tide waters from Brunswick to Great Island in the town of Harpswell
- of the Inh. of Bluehill for leave to build a Bridge -
- of Eli Twitchell & others for a toll Bridge across.